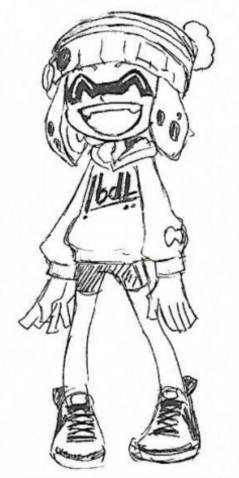 Bobble Hat is one of the members of the Blue Team.

Bobble Hat is one of the main characters of the series. She is usually seen around her team members Specs, Headphones, and Goggles.

Bobble hat originally had a hairstyle with two long blue tentacles and four shorter arms in the back of her head and wore a Bobble Hat, a Green Zip Hoodie, and Purple Sea Slugs. As of the Splatoon 2 Manga she has changed her hair style and now sports short tentacles with two in the front, two in the back, and two smaller arms in the back as well. She also replaced her Green Zip Hoodie with a Grey Hoodie. Bobble's Ink color is Blue to match her team's motif but she can change it at will. Bobble always maintains the same happy facial expression with her eyes closed.

Bobble is always shown to be happy. She is also very silly and almost always plays along with Goggle's actions. She is never shown to be angry but signs of nervousness or frustration can be seen via sweat drops that appear on her face or when her eyebrows furrow. Bobble is also quiet compared to her team mates rarely contributing to conversations. She does however, tend to state the obvious and narrate what she is doing from time to time.

Bobble's relationships with everyone are pretty much all positive. She is never shown to dislike anybody and is friendly towards anyone she meets.

- Bobble Hat has the second lowest rank in her team being C.

- Bobble Hat's eyes in her In game renders are blue, but this is by no means canon to the manga as her eyes are never seen.

- Bobble Hat's reasoning behind her happiness is that she loves being around her team and having fun.

- Bobble had the most changes to her design out of all the blue team members when transitioning to Splatoon 2.