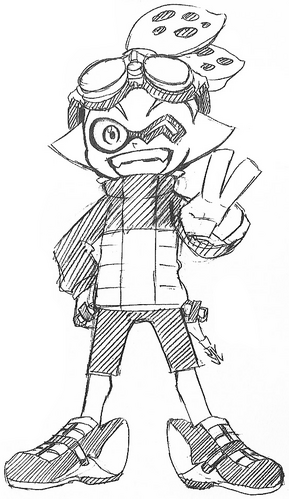 Goggles is the self-proclaimed leader of the infamous Blue Team and protagonist of the series. He has bested nearly every team he's come across with the power of luck and stupidity.

As a typical inkling, Goggles has a rounded face, pointed ears, and sharp teeth. His tentacles are usually a blue color, as it is his team’s motif, but can change at will. He has a light skin tone and his eye color is blue. In the Splatoon series, he wears his signature gear (the Pilot Goggles) paired with the Armor Jacket Replica and the Hero Runner Replicas. In the Splatoon 2 series, he switches out his Armor Jacket Replica for the Eggplant Mountain Coat. In the Hero Mode arc, he wears the Hero Mode attire with his Pilot Goggles. Goggles usually has a huge grin on his face.

Goggles is rather friendly and optimistic, always trying to lift his teammates' spirits and being a good sport after turf wars, no matter the outcome. Even if his opponents act blatantly towards him and his team, he always looks forward to becoming friends with them. He can also be quite silly and scatterbrained, shown by him admitting to mistaking toothpaste for wasabi and pulling down his friends' pants at unconventional times. His jar of pickled plums, the one his grandmother gave him, often finds its way on the battlefield on accident. His unpredictability has been recognized by others, namely Army and Eging Jr., as his strong point. It is implied he can't hear very well, which explains how often he mishears words and ignores warnings from his team. Goggles also often shows up naked.

- From his character bio, Goggles often leaves his house disorientated and tired due to having difficulty hearing his alarm clock.

- He had the lowest competitive rank in his team, being C- in Splatoon.

- According to his character Bio he can't hear things such as his alarm clock very well which may be the reason why he often ignores people or misinterprets what others say to him.

- Goggles is one of if not the fastest character in the entire series as he is able to surpass Aloha and Squid Kid Jr. in terms of speed.

- The pickled plums Goggles has with him are usually made by his grandmother.

- Goggles tends to not notice (or even care) when he loses his clothes and goes about naked, the reason for this is unknown.

- The author of the Splatoon Manga drew Goggles in real squid ink in order to promote the manga.

- Goggles is one of the strongest characters in the manga being shown to lift incredibly heavy objects without even breaking a sweat.

- Goggles, for whatever reason, has a uncontrollable habit of pantsing people, more commonly Rider. According to Goggles in the Vs. Team Costume Lovers chapter his body moves on it's own. Goggles was also rather bothered by the fact that Rider's pants had not fallen down during the Square King cup.

- According to Rider, Goggles's strength is so great that it cannot be measured by ranks.

- Although Goggles tends to be silly, on very few occasions he is shown to have a serious side to him.